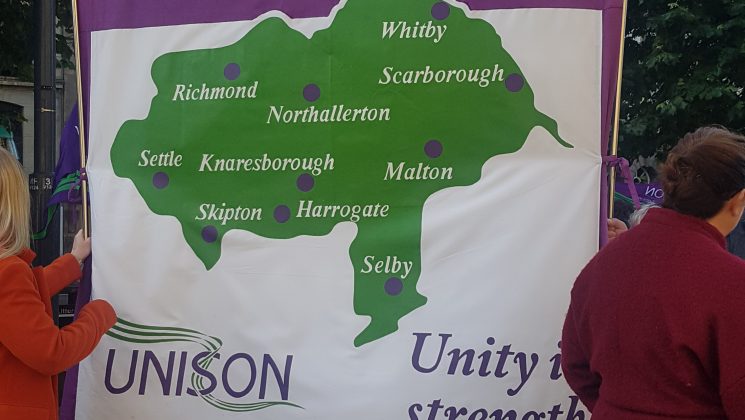 The government has suggested that devolution is coming to York and North Yorkshire, and that this will include a directly-elected mayor, but also the reorganisation of local government to a unitary model.

This will have a significant impact on our members and our branch. Most members of our branch work in local government, at North Yorkshire County Council, Selby District Council, Hambleton District Council and Richmondshire District Council. We also represent members working for town and parish councils across North Yorkshire. UNISON members who work for Harrogate Borough, Craven District, Ryedale District, Scarborough Borough and City of York councils are represented by their own branches but we are all part of UNISON.

This has the potential to be the biggest shake-up of local government in North Yorkshire since the current structure was created in 1974/5.

We have created these pages to help keep our members updated on the government’s plans and the work we are doing on your behalf to influence these proposals. It is important to emphasis that we want to hear from you too about the proposals. You can contact the branch using our online contact form.

What are the options being put forward?

We know that there will be two options presented to the government by the existing councils.

Proposal Two; the ‘east/west’ option – submitted by six of the seven District Councils (Hambleton District Council does not support this proposal). This proposes that two brand new unitary councils be created based on an east/west split. One council for the Harrogate, Craven, Hambleton and Richmondshire areas, and another council for the Selby, York, Scarborough and Ryedale areas.

Which option is best for local government workers and our members?

All UNISON local government branches came together to agree our test for deciding which option is best for our members. We agreed that our priorities on your behalf are to:

Your branch committee has considered both options carefully and has agreed that the NYCC ‘one council’ model best meets all three objective above. The branch committee in particular felt that the ‘east/west’ split would be too risky for our members who work at the county council and the district councils as it would mean all staff would transfer to a brand new employer on day one with all their terms and conditions up for renegotiation.

Under the ‘one council’ option, local government workers in York would be unaffected and workers at the existing district councils would transfer to the new council on their existing terms and conditions.

The branch has agreed to support the ‘one council’ option as it best meets our objectives of protecting jobs, leveling-up terms, conditions and pay, and it causes the least disruption to staff and the services they deliver.

We held an open meeting for all our members at the three district councils that this branch covers (Selby, Hambleton and Richmondshire) on 29 October 2020. The meeting was very well attended.

View the branch submission in support of the ‘one council’ proposal

Find our more about the NYCC ‘one council’ proposal

The various councils have made their submissions to the government, who will consider the proposals and then start a public consultation in the New Year.